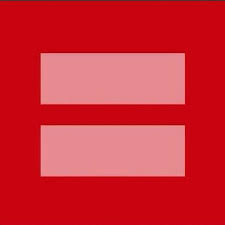 Remember the equals sign? That would be an example. You build an image up. You can then use that popularized image to gain some kind of leverage in either the market or in politics. Then with that increased leverage, you can popularize images again, and thus a capital cycle.

For having immense resources, Human Rights Campaign is frequently able to use its advertising dollars and basically brand the entire gay rights movement with whatever symbol it wants.

The ” = ” goes viral, and people don’t even know they’re basically helping assert HRC’s control over the gay rights movement.  They don’t even know it belongs to an organization — but maybe they learn about the group during the viral wave, and obviously see it as The Place To Go For Gay Rights, because well shit, if the ” = ” came from them, they’re obviously it.

Of course it’s contradictory, because the ” = ” also just supported same-sex marriage in general.  So it had a dual nature, of advancing the movement by creating a viral wave which saturates society, but also asserting HRC dominance in the movement.

You can also seriously damage your image capital by either neglecting it, or by doing something really horrible or stupid which damages your brand.  Again for example, did you know that HRC is actually a shitty organization that has frequently contained protest in favor of weak-ass lobbying (HRC subsidiary Garden State Equality at TCNJ in 2010, I was there), and taken other horrible positions like declining to support LGBT rights for immigrants?

Occupy Wall Street became THE brand of left-populism in the USA, and established good image capital by having a good message (class warfare) and going viral/critical (success is the best self-promotion).  It damaged its image capital, and by association the image capital of the Left, by fizzling out, starting to meander in bizarre directions uninteresting to workers, and having an organizing model that could not include most working stiffs (encampment-as-god, consensus).

The USSR simultaneously made-and-broke socialism’s image capital (or political capital) by having this awesome worker revolution in 1917 and then degenerating into Stalinist tyranny.  To be fair, the West had its cultural machines (media, schools, Reader’s Digest) cranking at full capacity to attack the hammer-and-sickle brand, too.

Like for example I’m wondering, how do I take the views my blog got today and actually channel it into something to keep my blog rolling, instead of just getting a little notice and fizzling out.  I’d like to encourage real-life organizing from people, maybe someday create some kind of network.  But aw hell, that’s way beyond my capacities at this point, so I’ll just keep writing more or promoting my old posts to keep this train moving.

2 thoughts on “intro to image capital AKA branding”